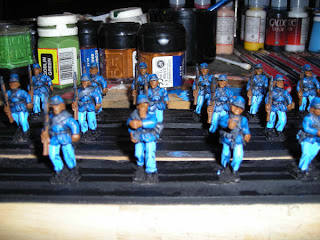 also a painting order WIP
Posted by Shaun at 16:15 2 comments:

Greetings from General von Ramstein,
to his most excellent Count deMoney, Royal Treasury.

Well the recruiting Sergeants have been out again, even before the current batch of Skavenbergs finest men have even been given there uniforms for the coming years service. Although the first Battalion of infantry have been seen performing drill along the banks of the River Odour, still wearing their civilian garb!!! The organisation seems to be in companies of 120 men, with 4 such companies fielded under the Colour Party of the Colonel.

The first of the mounted troops have also been active, although there mounts are too young for service yet, they have been designated at ‘Dragoons’.

The Artillery train are also lacking in essential equipment to construct their machines of war….. a Corps of Engineers might be required for Service.

Reports coming in from the Saxe-Nweilintz borders are that their recruiters are also active, our spies have found documents that state that grenadiers companies will be integral to a field Battalion…. Sheer madness from our Military advisors point of view. Recruits over 6’ are placed into these units, ‘all brawn and no brains’ was one of the dismissive comments made. Their Artillery seems to be ‘under construction’ also, but their Cavalry seems to outnumber ours 3 to 1, although of varying quality and use, again their mounts are too young for service.

(troops still bagged n tagged, along with Artillery and Cavalry)
(next order has been sent off to RSM for 3 bags of Muskets and another of Grenadiers)

I hope this message finds you in good health, and of better cheer, Please inform his Majesty that the first uniforms will be arriving in the next few weeks, we have been assured by the manufacturers.