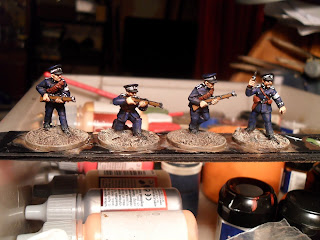 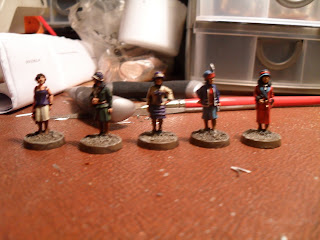 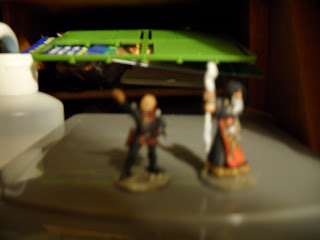 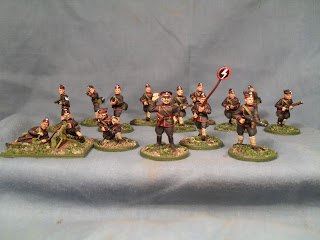 Hi, here is a picture of the newly completed but yet unvarnished BUF force for our little diversion into the British Civil War. The force currently consists of Captain Richard Gryphen, Dick to his mum (he has no friends obviously ;)) and his right hand man Sgt Filtcher. Cpl Pointer is usually found hanging with Pvt Victors and Pvt Lodder on the HMG, while Ensign Logg carries the Totem for the force. Pvt Lewis is armed with a drum fed LMG and then all the rest rifle armed. The system 'Flying Lead' uses WYSIWYG for equiping forces, so its pretty easy to work out who has what in the game, quality n skills add to the generation giving the Officers n specials qualities beyond the regular troops, altho with such a newly raised force there game quality means they do little but run away!!
The figures are BUF from Musketeer Miniatures, in 28mm.
The preview shots are of MM Gardia troops, painted as English Police.
A Reaver casting, 28mm Necromancer, painted as Al'Istar K'Rawlee, British Occultist Leader.
A Copplestone Future cop, 28mm, painted as Prime Minister Mosley.
and a gaggle of Copplestone Gangster Dames, 28mm, painted as scenario props ;)
All will be revealed !!!!
Cheers Shaun
Posted by Shaun at 15:09 3 comments:

Well the first show of the year occured and a new mini project has been started, kinda..?

Well 'flying Lead' is still flavour of the month and while at the show i saw the Musketeer Miniatures figure for a 'Very Britich Civil War'... men in skirts and fascists? I'm in!!!

So 90£ later i have core forces for BUF, Regulars, Scots convernantors and Anglican League units... plus some sailors i will wedge in :)
Rich (of the surfer shack blog, and author of flying lead :)) picked up some figures for his Cornish Seperatists and a bag-o-vehicles :) let the Lead Fly i recon.. game one saw my BUF handed their arses by Birtie Wooster... so all is cool with the world :)

Regrets, yeah i didnt buy the bags of WW1 brits and Germans (and maybe french !!) from the Bring n Buy, money is tight to be honest, but i think i could of managed to justify it in the long run.. probably...

So IF the owner of those figures ( i beleive they were Foundry) wants to get in touch with a view to maybe a swap of figures, or Services... or cash if they prefer still ... feel free to leave a message :)