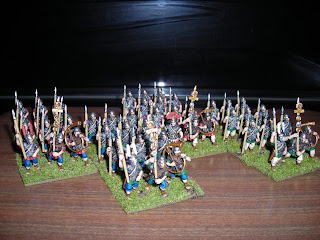 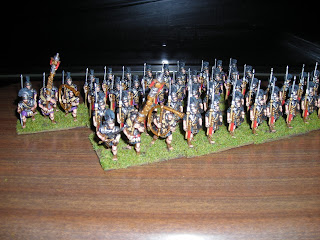 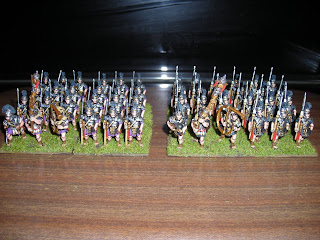 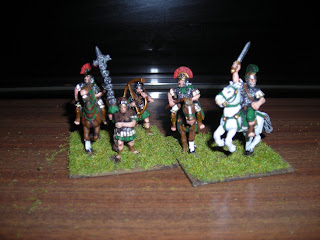 Well that finishes February's painting, 48 Auxilia, 48 Preatorians and 8 commands, for a total of 104 figures.

What have you missed.... well i went to Cavalier, sold the 3 French units and various bits of unpainted stuff and went and spent it all on NEwline figures for the ANcient Armies, 10 units of Infantry, 4 units of cavalry, 4 units of French to paint to sell at Salute and 4 Elephants, Yay. 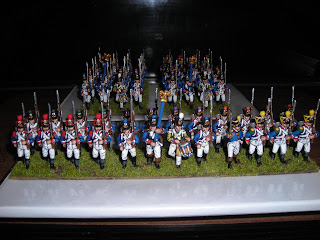 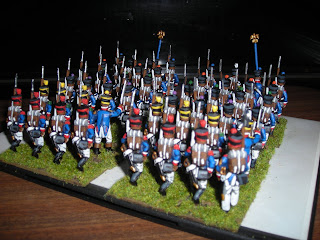 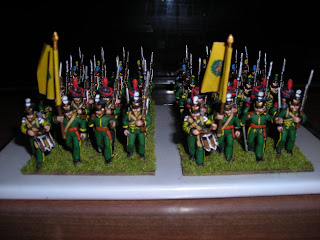 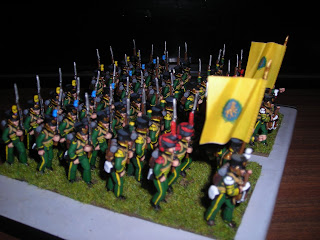 THe figures are by Newline Designs and come in 24 figure bags, giving a mix of command, flank and centre companies. The flag is from warflag.

Bases are 60mm across and 20mm deep with 4 figures on each. I put these on the bring and buy at 60£ each, the last lot of Austrians and British all went last year, the french i had painted didnt even make it through the door at one show.

Painting point wise i have another 56 points waiting from the Romans, but need to flock and sheild them, if i get the flock done i will suffer the sheild missing to count them in, or else i will wait til next month and have a shield-athon for all the Romans on Project2

Cavalier at Tonbridge on Sunday should provide me with more Ancient figures. Field of Glory arrived so i will try painting up some units or BattleGroups for those rules instead of WAB, then if WAB player buy erm they can just put them on Sabots or use casualty markers, hell at 2.50 a paint job they can afford to rebase them.

Well Hammerhead last Sunday was a bit disappointing to be honest, nice show, excellent BringNBuy, but i couldnt get any Ancient figures as it has completely gone over to Fantasy and SciFi figures...... NExt Sunday is Cavalier at Tonbridge, there WILL be Elephants.

I have been painting, despite the lack of posts, but havent finished anything, i have 48 PReatorians awaiting there flock and sheilds, meanwhile the a further 72 Napoleonic French are getting their base colours to be sold next Sunday hopefully, which should fund the Ancients Purchases. Want to add an Egytian Axeman unit to the Roman Eastern Army and as it is my world i was gonna add an Indian Army. So that is 144 Painting Points waiting in the wings and a pretty big shopping list for next weekend.

'Field of GLory' hasnt shown up yet, but Amazon say Tuesday. Will see how that effects my painting schedule. From initial read ups i think these rules will prove to be just the right mix of what i like to play, just need to fit the games into the 3 hour playing slots i have. I think my choice for a 50mm frontage for the my Ancients will mean i wont play in many torunements, but if i place then on Sabot bases it shoul be ok, but for private games on a 6by4 i think the bases should be ok, 18 figure Roman units tho instead of 24..... will have to see.

HAve also started playing some games against my 9 year old, he is very lucky on the dice, which is why i hardly ever win. He uses his Skaven Ratmen Army in the game i created for playing at LARP events, i called it 'Warleader' and the armies are multiple figure, based on 70cm GW circuar bases, while the board is an 8 by 6 grid. I have created armies for most of the Fantasy forces available in GW Plastic, and themed each army to fight diferently. Will post some pictures on here sometime. 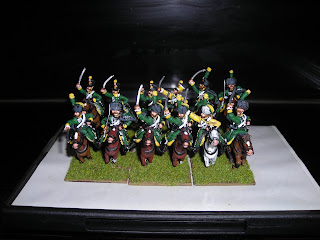 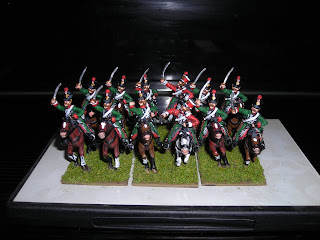 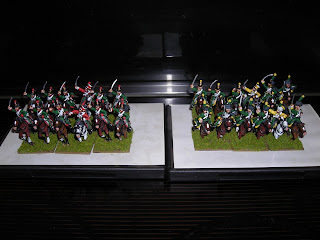 These are the last 2 units of cavalry for Graham from my 'spare' figures. These are French Napoleonic Chassuers 'a' Chavel, one unit is red faced, while the other is yellow. Colourful and will be gone come Wednesday, gone to be with the rest of Grahams figures, mostly painted by me over 20 years of orders.

This leaves just 4 units of 24 French 'Old Glory' figures to be painted as Danish troops and 18 Union Artillery on the painting order book, then its back to prepainted figures for Bring n Buy tables at shows, or sold off of here i suppose once i post the unit as finished and for sale.... another use for the blog i suppose, just dont think i have many uk based viewers.

Tomorrow is first of the annual treks to Newark, around 250miles round trip, to the Hammerhead show, have to drop off an order for ACW and hopefully pick up the last from Pat to complete his latest project. Also will be picking up some Ancients 28mm figures for the Roman Project, African Allies including elephants. Might even pick up a 'Field of Glory' ruleset in advance of the cheaper preordered one off of Amazon, which i could then sell on to one of the club guys, splitting the diferance on the 2. Wont get any Campaign books tho. Will wait for those.

Wish i could get ahold of the new plastic ancients figures too, especially the warband celts..... patience is a virtue i guess. 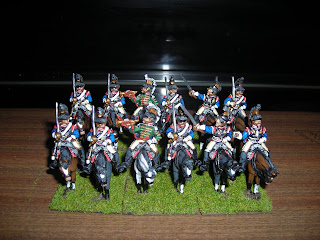 Painting for Graham has progressed a little further too, finishing a French gun Battery I started last year, Bavarian Garde Du Korps, Heavy Cavalry and then a Unit of French Cuirrassier.
Posted by Shaun at 00:09 2 comments:

This weekend i have mainly been sleeping in a castle

Well the LARP season has started with a visit to the Dragons, its a hard life being a Diplomancer for the Bears Faction, booze and laughs and trip to Wales to watch them win the rugby..... 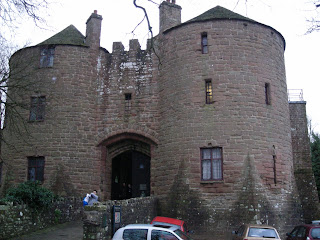 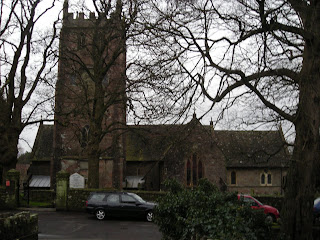 This is the view from my letter box..... 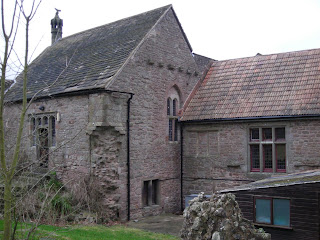 The Patio, or courtyard.... 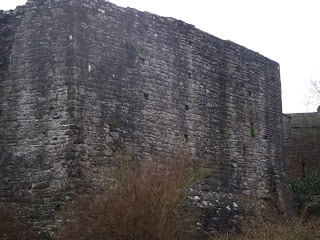 The back fence, the neighbours are welsh dont ya know..... and they were revolting 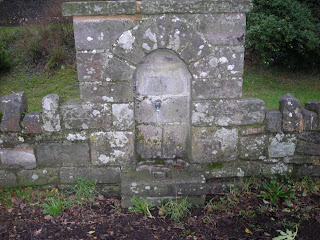 Giving something back to the peasants.. 1887 renovations, well the place was built in 1208, rebuilt in 14 summit and is now a Youth Hostel.
http://www.castlewales.com/stbrivls.html
Posted by Shaun at 23:53 1 comment: